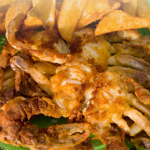 The Dr.Backup annual crab feast was held at Jerry’s Seafood Restaurant (Home of the “Crab Bomb”) in Bowie, Maryland. This is the one business meeting of the year that everybody is happy to attend.

Jerry’s is a very popular destination and they don’t take reservations. I volunteered to get to the restaurant about 30 minutes early to get in line — so the rest of the party could be seated on time.

Well, funny thing is that even though I got there early, I was one of the last to arrive. By time Susan and I sat down, the bar tab was already open and drinks were flowing — gee, no surprise there.

While the group decided to skip the finger-lickin’-old-bay-Maryland-steamed-crabs this year, we did manage to order up a seafood extravaganza with appetizers that included crab soup, spiced shrimp, crab dip, and the surprise favorite – fried calamari. 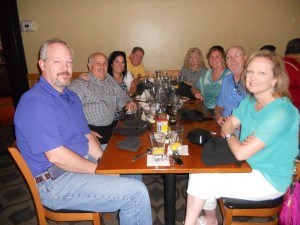 The featured entre (ordered by 4 of us) was the mini crab bomb. A ball shaped “blob” of seasoned jumbo lump crab meat with virtually no fillers. The waitress literally sounded like a rocket scientist when she described to us how they actually made their signature dish.

By the time our plates were cleared, we were all stuffed.

However, it’s amazing how little peer pressure it took to persuade everybody at the table to try a “bite” of an assortment of delicious desserts. (You really believe we all took just one bite?)